Home / Blog / A year in Lockdown

On the 23rd of March there is an anniversary we could never have anticipated in late 2019 and early 2020 –  we have been in various forms of lockdown for a whole year.

This time last year, we had no idea how long our lives would be turned upside down by a tiny virus.

Normally living in a country where we are lucky enough to have a huge amount of freedom, we have faced restrictions that none of us would ever have considered. People’s lives have been cruelly changed, with far too many of the population dying from the virus, and also in business, many companies having to close down due to lack of trade, or being unable to continue financially.

Here at Creative Nature, we are incredibly grateful, to still be working and actually seeing our business grow. We’d like to say thank you to all who have played a part in keeping Creative Nature on a growth path…

The Pandemic kicks in…

Last year at the beginning of Covid19, the world began to pause. People were scared to go out, there was a shortage of goods in supermarkets, and initially, it felt as though we were living in an ‘end of the world’ film! Supermarket shelves were empty, there was a rush to buy certain products and everything we were looking forward to was being cancelled.

However, at Creative Nature we were very lucky and we moved quickly when we realised people were starting to bake more than before – and sales of our baking mixes began to rise. That’s been the story ever since. 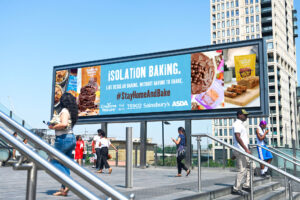 Being in a position where we were still able to continue, we wanted to be able to give back to those not as fortunate as we were.

We were able to donate some of our ambient snacks to the local food bank in Walton and Hersham. Foods that don’t need refrigeration, like our protein bars, baking mixes etc. No one thinks about the people in need who also have food intolerances and allergies – some may be too embarrassed to ask for certain foods – when they feel they are being given a hand-out.

As a team we have also been fortunate. We worked from home, supporting each other throughout those times with Zoom calls and chats, and when people did have to go back to the office, everyone pulled together to make sure we worked in a flexible and social distanced way.

And it seemed that everyone was trying out, home baking, including members of the Royal family, and famous footballers and actors. 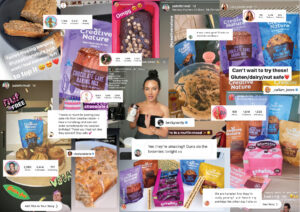 Thanks to this, our baking mix sales sky-rocketed. Then a new problem arose – with everyone baking there was a shortage of flour in the super markets.  People began to buy the free-from alternatives when they didn’t necessarily need it. This left many people who did need the free-from flour, bereft of the product.

We were able to help meet their needs, and were able to boost the marketing for our gluten free, all-purpose flour, which sold well during that time. Having the ability to sell online gave everyone access to ingredients that were safe for them to use.

We didn’t slow down because the world did….

Between the first few months of lockdown last year our Instagram profile grew to 32K in June and now in February 2021, we are at 36.2k, which is amazing, but all down to our wonderful, supportive followers.

They have been instrumental in giving us feedback throughout the year about new products, sharing recipes that have worked for them, and we have been grateful for the endorsement of some famous names, who like Julianne our CEO, also suffer from different food allergies.

Our Simply Spiced Carrot Cake Loaf Mix and our Pancake and Waffle mix are some of the new products for which people have been giving us very positive feedback.

During the latter part of the year we won two awards; Best for Home Baking, in The Grocer Awards, with our Rich Chocolate Cake Mix, and Quality Food Awards for our Gnawbles range.

Continuing to fight the battle for sufferers of Anaphylaxis…

Julianne, as a sufferer herself of anaphylaxis, has always challenged issues around safe food labelling and continually campaigns for changes to the laws around food regulations to keep fellow sufferers safe.

To this end, she has been campaigning for Natasha’s Law and she became an Anaphylaxis Ambassador in the UK for the Anaphylaxis Campaign and also an l Ambassador for the Teal App. We are grateful that she has been recognised and been invited into these roles.

We’re still here, preparing and making changes as we go through the vagaries of Brexit and the slow climb out of lockdown, and we’re immensely thankful to everyone who supports us….Our customers, our suppliers, our partners, and each other in the team.

Creative Nature is looking forward to developing other new products and new adventures in the future.

Thank you for your continuing support.