St Patrick’s Day is coming up this week (Thursday March 17) and, for some, the world will turn rather green!

There’s a lot of interesting things to note about St Patrick’s Day and we’ll be getting to them in a bit. But, here at Creative Nature, we know that this day celebrated widely. We want to make sure that everyone can celebrate without allergens getting in the way. Our easy to bake baking mixes can be the perfect start to any themed bake. Keep an eye out for how we use our Chocolate Cake Mix to make a dessert to impress. With all of our products being Top 14 Allergen free, no matter if you’re gluten free, dairy free or nut free anyone can use our products to celebrate how they like.

It’s interesting to note that the original colour for St Patrick was actually blue  – a light blue which can still be seen on old flags! The colour green started to be adopted in the late 1700s when it became more common to wear the symbol of the shamrock. This was to show pride in Irish heritage at a time when English rule was trying to expunge the Irish heritage and language.

St Patrick, also known as the Apostle of Ireland, was believed to have arrived in around 433 and to have spent 40 years travelling, preaching and teaching Christianity. He apparently delivered his first sermon at Saul in Northern Ireland and Saul Church was believed to have been built on that site. It’s believed St Patrick died there on March 17.

Over the years, St Patrick’s Day has been taken on as a ‘moment’ worldwide. In London, the first parade for two years took place this last weekend, with around 50,000 people participating. The event started at Hyde Park Corner and was a festival event with music, food, song, dance and much more. The Grand Marshals for this year’s event were all key workers.

It’s in America that the day has been embraced wholeheartedly. Many with Irish ancestry dress up in green and celebrate their Irish heritage or help others celebrate. In many cities, particularly New York, there are parades, events and even the river may run green.

It was in 1903 that St Patrick’s Day was actually officially named as a bank holiday in Ireland and, could therefore, be an excuse for people to get out and celebrate their heritage or love of the Irish culture.

At Creative Nature, we’ll being celebrating with our St Patricks Day Sale and our new gluten free themed recipes! 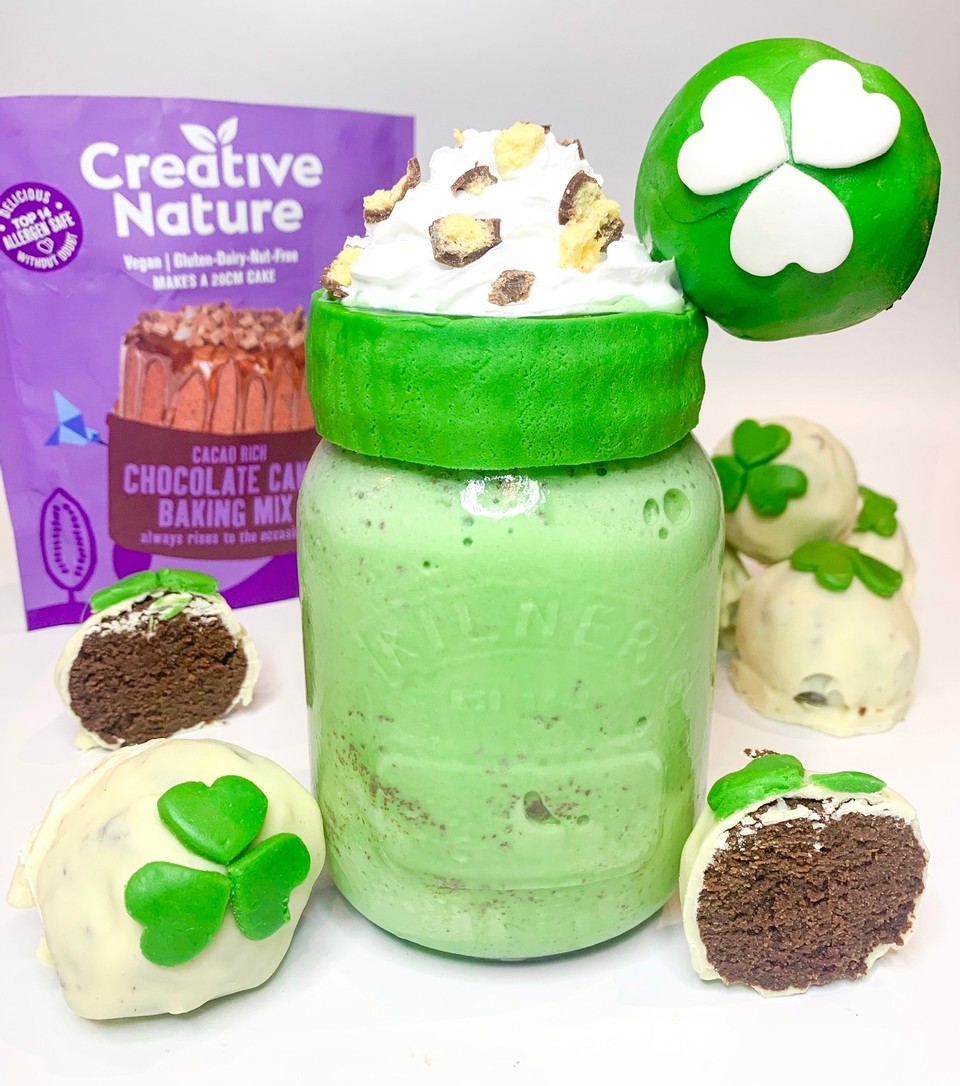 We wanted to have some fun celebrating St Patrick’s Day this year at Creative Nature. So, we bring you this vibrant and delicious themed monster shake. We’ve even used some of our easy to bake Chocolate Cake Mix to create some fun Cake Pops. The recipe for this will be going live on both our website and our social media on the 17th, so be sure to keep an eye out.

Will you be doing any St Patrick’s themed bakes?

There are certain symbols which are heavily associated with St Patrick’s Day.

For example: the colour green, in myth, is believed to make you invisible to leprechauns. The mischievous sprites, who will ‘pinch’ you or cause you aggravation if they can see you! It also resonates with the colour of the shamrock.

A well known symbol of St Patrick’s Day, this is the Irish name for figures of folklore which were originally called ‘lobaircin’ which means ‘small bodied fellows’. It’s believed this myth came from a deep-seated ancient Irish belief in fairies, who were tiny men and women who lived alongside us and acted for both good and evil.

Shamrock, also known as ‘seamroy’ is a sacred Celtic plant symbolizing the re-birth of Spring. In the 1600s it became a more political symbol of Irish nationalism. It showed solidarity and pride in Irish heritage and anger at English rule.

Irish Celtic history was one which was filled with stories and the Irish are still famed for this today. Theirs’s is an oral culture where legends, religion, myths and history were passed down the generations through story-telling and often through music. When the English tried to stamp this out, music became even more important. In the time of Queen Elizabeth I; she even decreed that artists and pipers were to be arrested and hanged if they were caught. Now, of course, it’s about having fun and celebrating the Irish heritage across the world.

Will you be celebrating St Patrick’s Day this year?