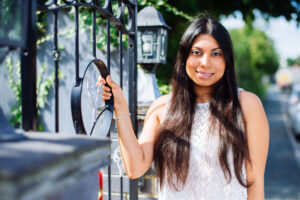 It’s our 9th birthday!  Nine years ago, at the age of 22, Julianne, our CEO, acquired Creative Nature and started a company which catered for people like her – living with severe allergies and never being able to trust snacks. She took on just one employee.

Today, our business is thriving, with a young team working hard, continuing to grow the business, and as they say, ‘the rest is history!’ and the future is bright.

We can’t believe the time has gone so fast.

We’re growing! – the first thing has to be the fact that as a business we have survived and thrived during the current pandemic and that has to be something to celebrate. Other businesses have not been as lucky.

As a team we have continued to work hard throughout the pandemic, and whereas many companies have struggled to survive, we have actually grown. We’ve introduced new products, taken on new staff members, and we’ve actually had a 50% rise in sales, for which we are grateful to our customers. 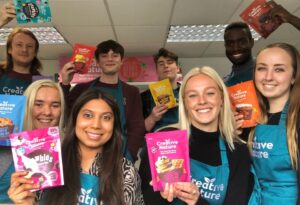 A few weeks ago, Julianne won this award at the SME Nationals. These awards should have taken place a year and a half ago, but due to the pandemic were postponed. The team were there to celebrate Julianne’s award, because as she says, it wouldn’t have happened without us.

Another win was that the waitress serving Julianne also had a peanut and tree nut allergy, so she completely understood the importance of handling food with care. This meant Julianne could celebrate knowing she was safe in what she was eating! 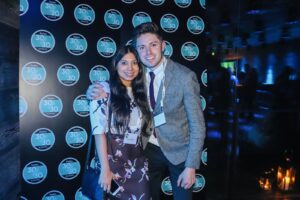 The truth is Julianne has won many awards on this nine year journey. One of her highlights came in 2019, when she was named in this list, as someone to watch in Retail and E-commerce, which is huge recognition in itself. However, what was also amazing were the other names on that list, including one of her childhood heroes Daniel Ratcliffe aka, Harry Potter himself!

Creative Nature won this national award competing against all the award entries and area winners of the FSB Small Business of the year. Eleven category winners were selected, and Creative Nature was the overall winner which was fantastic.

Creative Nature has used crowdfunding successfully, twice. This has helped the team take the next steps when it comes to manufacturing and increasing the product range. Julianne took that route after appearing on the BBC tv series Dragons’ Den where she was offered funding from a Dragon. However on reflection she decided that was not the right route to investment and growth for her and she took the decision to go down the crowdfunding route. She felt that having a more community feel to the business was right for Creative Nature.

Appearing on Panorama and Sky News 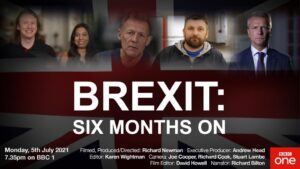 July this year was a good month for us. Creative Nature was one of four companies to be filmed for Panorama. “Brexit Six Months On”.  We were the youngest business to be involved in the film. It was a wonderful opportunity for people to see what we do in our business, and how we have worked hard to negotiate ways around the bureaucratic problems thrown up by Brexit. We have worked hard as a team to overcome these problems.

Julianne also appeared on Sky News several times talking about the economy and its effect on business and really enjoys working with the team at Sky. Check it out here.

When the impact of the lockdowns kicked in, and people were unable to get the help they normally did, we joined many other people by donating a range of our ambient snacks to our local food bank: Walton and Hersham Food Bank. We did this because we realised that those who live with allergies – and were in financial difficulty – might find there were no snacks they could eat in food parcels. Also people with allergies work in the NHS and we wanted to show them our support.

We also sent out products to care workers, with the help of one of our celebrity customers, Vicky Pattison – previous I’m a Celebrity winner. Julianne’s own mum works in the care sector and also had Covid19 during this last year so the impact on the care sector was very clear and close to home. 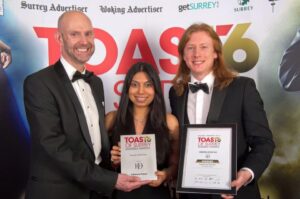 Countless awards for products and our CEO

Our, Rich Chocolate Cake Baking mix, Gnawbles and our Banana Bread have all won awards.

(add in links to any blogs about awards here)

Campaigning for those living with allergies

As a company we are heavily involved in campaigning for those living with allergies mainly through supporting Julianne as she speaks out and is a voice for people like her across the UK and overseas.

Julianne is an ambassador for Anaphylaxis UK, and also the UK ambassador for the Teal App.  We are big supporters of Natasha’s Law – new allergen regulations, which should be in force soon. Julianne is involved in many national discussions about making food safer for those with allergies, in terms of food labelling and other important issues.

We’d like to thank all of our customers who have supported us by buying and eating our products, over the last nine years.

We hope you’ll be joining us in a celebratory piece of cake – we’ll probably be found eating chocolate cake this week! No prizes for guessing which cakes we’ll choose!