Did you know that the turn of the month marked World Vegan Day? This year the focus of The Vegan Society’s campaign is to think about how to support vegans in crisis during the challenges we are all facing at this time.

With many people living with shrinking budgets, their campaign shares resources, including recipes and tips on cost-effective ways of vegan living.

What does it mean to be vegan?

To be a vegan means you eat nothing that comes from animals.  Therefore, this doesn’t just mean not eating meat and fish.  Vegans also do not consume foods such as dairy, eggs or even honey.

People embark on a vegan diet for many reasons, that could be ethical, environmental or for health reasons, or a combination of these reasons.

Also, many vegans take this beyond their diet and avoid wearing animal products such as leather and wool, wishing to live a life that attempts to exclude all forms of animal exploitation and cruelty.

How is Creative Nature vegan friendly?

Non-vegans get most of their calcium from dairy foods, but vegans get it from other sources, such as green leafy vegetables, ie. broccoli, cabbage, and okra; and from unsweetened soya, rice and oat drinks. 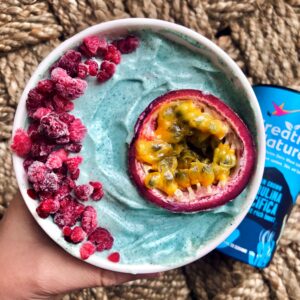 Creative Nature has a strong vegan following because all of our products are vegan friendly as well as being free from the top 14 allergens. Some vegans also have allergies of course!

These can be added to smoothies, smoothie bowls, vegetable stews, added as toppings – the versatility is endless, and they all help to keep your body healthy, and provide some extra protein.

Our snacks are also perfect to add that extra boost of protein during the day.  We have a range of Protein Crunch bars, and Raw Fruit Oatie bars.

Why not check out our recipes to find out how our products can be used in a variety of tasty ways.